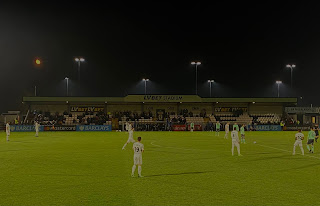 BOREHAM WOOD and Notts County took a point each from a good contest on a cold night at Meadow Park.

County went in front just past the half-hour mark when Ruben Rodrigues met Carl Robert's free-kick with a firm header.

Wood raised their game after the break and levelled after 64 minutes when skipper Mark Ricketts threaded the ball through the visitors' defence for Tyrone Marsh to slot home.

Wood stay in second place in the National League, one point behind leaders Chesterfield.

On the down side, Wood manager Luke Garrard revealed in his pre-match interview that keeper Nathan Ashmore and defender Femi Ilesanmi are both ruled out for the rest of the season through injury.

Despite that disappointing news, though, Wood are continuing to hold their own at the top end of the table. 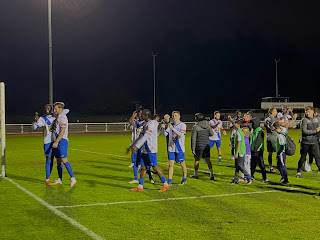 BEFORE kick-off, it was already a day of celebration at Enfield Town, as England's first supporter-owned club marked the 10th anniversary of moving into its own ground, the Queen Elizabeth II Stadium.

On what was billed as 'Whole Club Day', the youth teams, children's teams, disability squad and walking football teams were all in attendance. Junior members were playing prominent roles, taking over many match day tasks, including selling raffle tickets, assisting in the club shop, and one young boy doing a sterling job on the PA microphone.

On the pitch, visitors Merstham initially threatened to spoil the party, leading 1-0 at half-time through Korrey Henry's 11th-minute penalty, awarded for a push by full-back Ryan Kirwan.

But a stirring fightback from the Towners after the break ensured a happy day all round for the Enfield faithful.

Mo Faal levelled after 54 minutes from another penalty, awarded when Percy Kiangebeni was upended.

Faal put the hosts in front with a quarter of an hour remaining, lashing home the loose ball after keeper Toby Bull had blocked Kiangebeni's initial effort.

Andre Coker wrapped up the three points with a third goal in the 90th minute, firing home after being put through by Faal.

The win today keeps Enfield Town in second place in the Isthmian Premier Division, five points behind leaders Worthing, who were beaten at home by Cheshunt today.

Twenty years after its formation, the club is now represented by over 30 teams at various levels of the game.

Both on the pitch and behind the scenes, there is much to be proud of at Enfield Town. 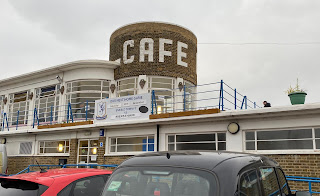 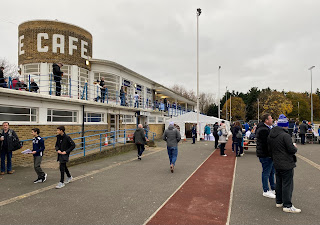 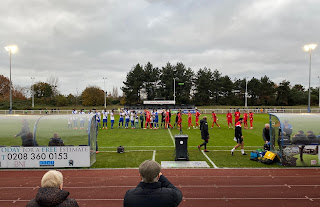 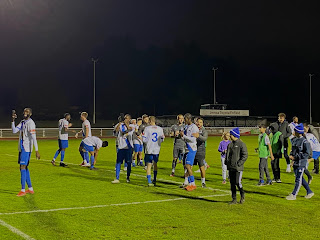 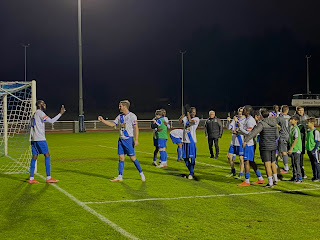 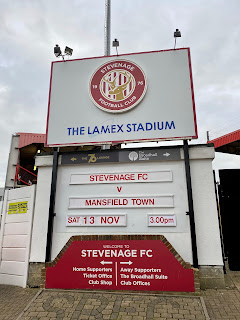 IT'S been a long wait, but Mansfield Town secured their first away league win of the season, beating Stevenage 2-1 at the Lamex Stadium.

Former Stags striker Jamie Reid, who moved to the Lamex in the summer, can consider himself particularly unlucky not to have scored twice for his new club today, striking the inside of Nathan Bishop's right-hand post on two occasions in the first half.

Ryan Stirk's 65-minute goal, a curling shot beyond keeper Adam Smith after a neat piece of skill to get past an opponent, proved to be the winner.

Stirk had been on the pitch for 12 minutes at that stage, after coming on as a substitute for the injured George Lapslie.

This second consecutive league win, and the fourth in a row in all competitions, sees Nigel Clough's team climb to 18th place in the League Two table.

That league position is still well below expectations, but the recent upturn in fortunes certainly gives a sense that the season has much more to offer.

The bad luck with injuries that has plagued the team all season still hasn't gone away, though.

Post-match, Clough noted that striker Danny Johnson, scorer of a hat-trick against Newcastle United U21's in the Papa John's Trophy last Tuesday, has damaged ankle ligaments and will be out for at least three to four weeks.

Three players left the field injured today too: Rhys Oates (groin), George Lapslie (shoulder) and George Maris (ankle). At this stage, it's unknown if any of those will be available for next Saturday's home game against bottom club Scunthorpe United.

Today though, the three points gained in Hertfordshire meant the 535 travelling Stags fans left the ground in buoyant mood. 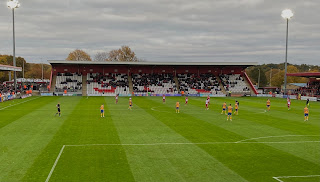 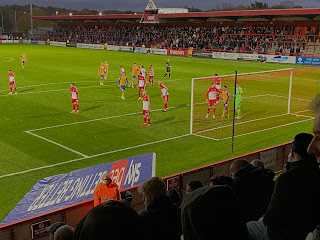 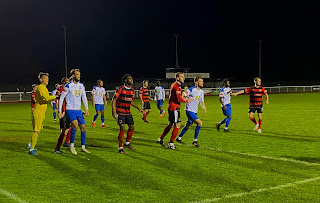 THE competition may be called the Middlesex Senior Cup, but - as expected - both teams fielded a relatively junior line-up for this tie at the Queen Elizabeth II Stadium.

And it was the visitors' 16-year-old keeper George Gay who made something of a name for himself on his first-team debut, saving the first penalty kick of the shoot-out to help his side reach the next round.

The young keeper grasped an overhead kick at the second attempt from Luke Cook towards the end of the first half, but was otherwise not seriously tested, despite Enfield Town having much the better of the game.

Nathan Smith put the Towners ahead just before the hour-mark, turning the ball in at the far post from a curling free-kick.

After both teams had used their full allocation of substitutes, Bedfont started to pose more of a threat as they chased the game. The equaliser duly arrived five minutes from time when skipper Lewis Pegg's firm downward header from a corner gave home keeper Adi Connolly no chance.

With the tie going straight to penalties, Gay got down well to his right to parry the first kick from Cook.

Lee Chappell and Erald Desa both scored for the Towners, before Andre Coker blazed over. With the visitors scoring four out four, it was they who emerged as winners on the night. 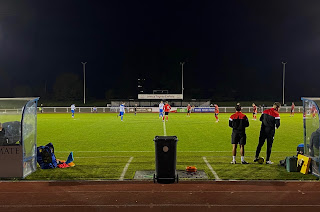 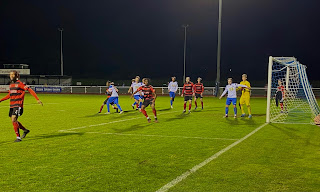 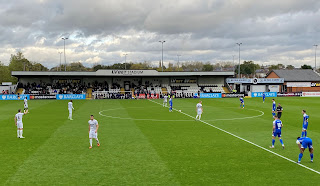 SEVEN days ago, Boreham Wood surprisingly climbed to the top of the National League thanks to their 1-0 win at home to Southend United, combined with favourable results elsewhere.

Reflecting on a journey that began with his purchase of the club in 1999, chairman Danny Hunter admitted in his programme column today that he had spent all last Saturday night staring at the league table on the iPad.

On FA Cup duty at Meadow Park today, Wood booked their place in the 2nd round of the competition with what became a comfortable 2-0 win against fellow National League side Eastleigh.

A largely quiet first half was brought to life when Wood broke the deadlock in stoppage time. A neat build-up involving Jacob Mendy Mendy, Tyrone Marsh and Kane Smith ended with Scott Boden diverting Smith's ball across the box into the net from close range to give Wood, and the tie, a welcome boost going into the break.

It was Boden who doubled Wood's lead just past the hour mark, turning and firing past keeper Joe McDonnell at the near post after Marsh had delivered a cross from the right flank.

The former Chesterfield striker was celebrating his hat-trick in front of the home fans with three minutes remaining, only to be thwarted by a late flag from the linesman.

It was a dominant performance after the break from Wood, who will learn on Monday evening who they will face in the 2nd Round later this month. 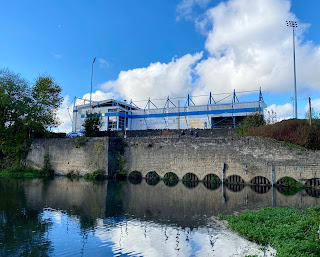 WHEN Mansfield Town dismissed manager Graham Coughlan just over a year ago, it occurred to me that the club had already sacked three managers since I had last attended a Stags home game.

The play-off semi-final defeat by Newport County back in May 2019 had turned out to be David Flitcroft's last game in charge. His successor, John Dempster, would be gone before the following Christmas; Coughlan also lasted less than a year. 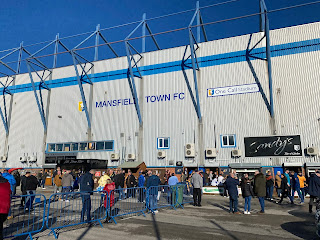 Just one week short of the first anniversary of Nigel Clough's arrival at One Call Stadium, I was at last back in the ground, and with a ticket for my preferred seat in Block K of the Ian Greaves Stand.

The Stags' run of 12 league games without a win had seen Clough's team drop to 23rd place in League Two. 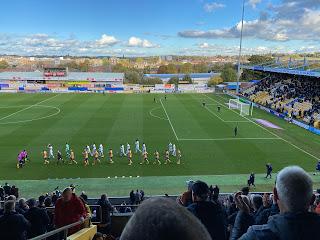 And it could have been a case of 'here we go again' when Danny Johnson wasted a golden chance to give the Stags an early lead, blazing a penalty over the bar and into the North Stand with just two minutes played.

Undeterred though, Mansfield recovered to take the lead in the 18th minute, Rhys Oates finishing coolly after collecting a perfectly-weighted pass from Stephen Quinn.

Johnson would make amends for his penalty miss midway through the second half, slotting home the second goal after a quality assist from Oates, who beat one centre-back in the air, before flicking the ball over the other in Paul Gascoigne style, to tee up his strike partner.

There was a standing ovation for the players and management after the final whistle. It really was good to see the fans staying behind the team despite the recent poor run of results. 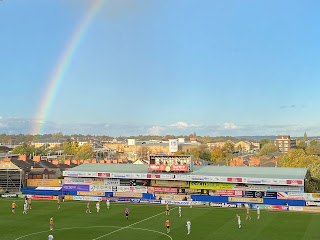 From a personal point of view, on my first visit to this ground post-lockdown, it was also heart-warming to look around the ground and see the fans - families and friends - here at all, after they'd had to endure a whole season of games played behind closed doors in 2020/21.

Given the recent improvement in performances, and now with that elusive win secured, those fans will be anticipating better times ahead for Nigel Clough and his team.

One Team One Town 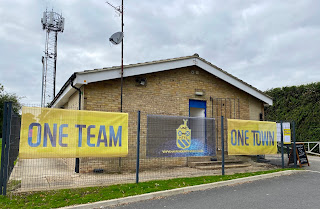 MANY times I've visited Rothamsted Park in Harpenden, including the nine times I've run the Herts 10k race that starts and ends here every October (COVID restrictions permitting). On many of those occasions, I've parked in the neighbouring Amenbury Lane car park.

To my shame, I had never realised that Harpenden Town's ground is just the other side the hedge, until I looked it up after listening to Ollie Bayliss' interview with the club's chairman during the Non-League Show on BBC 3CR last Sunday.

With that, I was sufficiently tempted to pay my first visit to the ground. 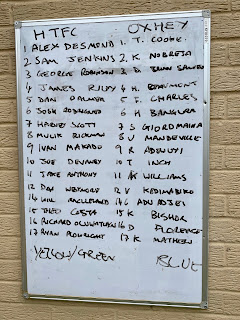 On an overcast afternoon, Harpenden Town took the field wearing their new kit of yellow and green stripes, in celebration of the club's 130th birthday.

After a goal at each end in the opening 25 minutes, it was the home team who began to take control of the game, and they went back in front just before half-time when Jake Anthony drove home a free-kick from the edge of the 18-yard box.

Harpenden extended their lead on the hour-mark when the third of three consecutive corners for the hosts saw Sam Jenkins head home.

Home keeper Alex Desmond acrobatically tipped away a looping header to prevent the Jets pulling a goal back, before Joe Devaney made it 4-1 after round the keeper and getting a slice of good luck when a defender made a hash of his attempted goal line clearance.

Harvey Scott's header, which looped in via the inside of the post, wrapped up what in the end became a comfortable win for Harpenden Town.

Following my trip to Hadley last month, Rothamsted Park is another ground I've visited this season for the first time, having previously passed by many times without knowing it was here.

These are exciting times for Harpenden Town too. As well as sitting in third place in the Spartan South Midlands Premier Division, the club is in discussions with the town council about installing a 3G pitch on the site.

I left the ground in good spirits, happy to have visited another local club that I had overlooked for such a long time. 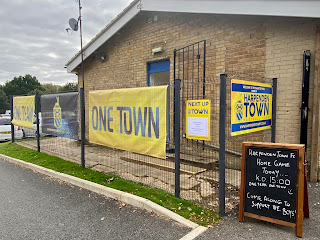 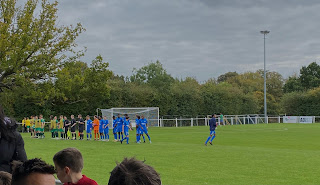 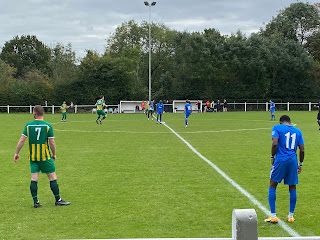 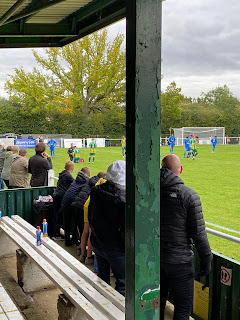 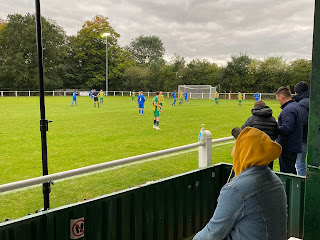